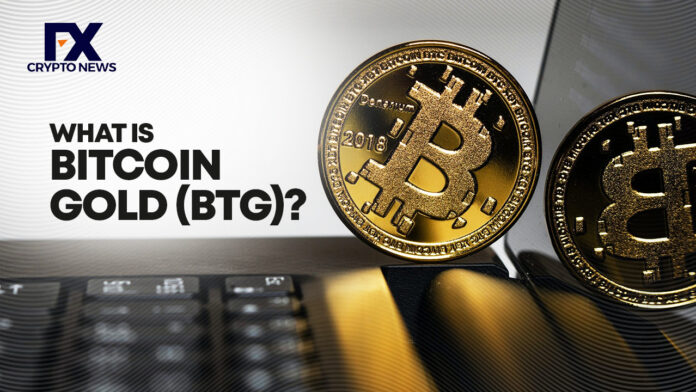 Bitcoin Gold (BTG) is a fork of the Bitcoin cryptocurrency. BTG is a community-driven project aimed at attracting institutional and enterprise shareholders.

The project allows new users worldwide to participate in mining while developing a decentralized democratic Bitcoin infrastructure. Users can use Bitcoin Gold for various purposes, including exchanges, swap services, and wallets supported by several browsers and service providers.

According to the BTG roadmap, Bitcoin Gold aims to improve and expand the crypto space by utilizing a blockchain closely compatible with SegWit and the Lightning network while avoiding using Bitcoin hash power responses. SegWit (Segregated Witness) is a Bitcoin platform upgrade that modifies how data is stored.

Meanwhile, the Lightning network is a “Layer 2” blockchain that lets users quickly trade Bitcoin. Bitcoin hash power is the amount of computing and processing power contributed to the network by mining.

The project aims to be a user-friendly crypto asset for users, miners, and developers, with room for new ideas.

In addition, the project intends to launch BTGPay, which connects merchants, services, and integrators to build solutions and assists consumers in finding solutions to their problems. BTGPay aspires to be the e-commerce payment platform of the future, with low transaction fees, chargeback protection, and debit-card-based service.

Who are the founders of Bitcoin Gold (BTG)?

A group of enthusiasts with diverse backgrounds and skills founded Bitcoin Gold. Hang Yin is a Bitcoin Gold co-founder and lead developer. In 2015, he received his bachelor’s degree in computer science from Fudan University. His professional career began immediately after he graduated.

Yin joined Google as a software engineer in late 2015. After three years with the tech behemoth, Hang Yin launched Bitcoin Gold on his own. In 2018, he was also a founding member of HashForests.

Martin Kuvandzhiev is the second co-founder of Bitcoin Gold and a member of the company’s board of directors. He graduated from the Technical University of Sofia with a degree in computer software engineering, and his professional career began as a food service worker at McDonald’s.

He started working as a lead iOS developer at pyre JSC in 2016 after becoming an assistant professor at the Technical University of Sofia in 2015. He co-founded Bitcoin Gold in 2017 and has since founded another company called GoStartups.net. Kuvandzhiev is currently the CEO of Assetify.

Bitcoin Gold is a one-of-a-kind combination of the original Bitcoin blockchain’s inherent properties and an innovative approach to blockchain development and applications.

As a hard fork of the original Bitcoin token, BTG aims to revolutionize mining by introducing a new proof-of-work algorithm that addresses Bitcoin’s scalability issues.

Bitcoin Gold, as an open-source protocol, allows developers to participate freely in the governance and development of the blockchain. According to the company, this is a must-have requirement for promoting decentralization and one of the major issues with Bitcoin.

Bitcoin Gold is one of the first hard forks of the original cryptocurrency, and it has piqued the interest of institutional and enterprise investors.

BTG can be purchased on various exchanges, as well as swap services and wallets. Finally, several online browsers and service providers have actively adopted Bitcoin Gold.

How many Bitcoin Gold (BTG) Tokens Are in Circulation?

Approximately 7% of BTG tokens were set aside for bounties and app collaboration, with the remaining 5% going to founding team rewards. The remaining 8% of the tokens were spent on pre-fork expenses and community development.

How Is the Bitcoin Gold Network Secured?

Bitcoin Gold is a hard fork of Bitcoin that uses the proof-of-work (PoW) consensus algorithm. However, one of BTG’s main objectives was to revolutionize mining by introducing the Equihash PoW, which favors GPU mining in contrast to the Bitcoin blockchain.

While application-specific integrated circuit (ASIC) miners are the mainstay of the Bitcoin mining industry, this version of Equihash uses more memory than an ASIC can provide but functions fine on many graphics cards. Bitcoin Gold prioritizes mining power, as opposed to the Ethereum blockchain, which uses the proof-of-stake (PoS) mechanism and benefits stakeholders.

How can Crypto Investors Use Bitcoin Gold (BTG)?

Alternatively, they can speculate on the Bitcoin Gold price difference by trading a contract for difference (CFD) on a specific cryptocurrency.

A CFD is a financial instrument that is a contract between a broker and an investor in which one party agrees to pay the other the difference in the value of a security or the difference between the opening and closing of the trade.

Where Can You Buy Bitcoin Gold (BTG)?

BTG is a first-generation Bitcoin hard fork that is traded on several exchanges. Binance is one option, but Bithumb, Huobi Global, and Bitfinex are also excellent choices.

Cardano Staking and How It Works

Does Bitcoin Gold (BTG) have a future?

Cryptocurrency experts forecast the price of Bitcoin Gold each year. In 2028, it is predicted that BTG will trade for between $149.53 and $181.88. Throughout the year, its average cost is anticipated to be around $153.84.

Bitcoin Gold (BTG) is renowned for its innovative features and strong technical foundation rather than for its dramatic price swings. Although Bitcoin Gold has a lower mooning potential than other coins and tokens, it can still be a successful investment.