Following a catastrophic blockchain collapse, projects moving from Terra to other ecosystems have provided a model for how to adapt and renew.

The Terra ecosystem was blooming with talent and creativity during the peak of the 2022 bull market. The Terra blockchain’s native token had climbed to the top ten cryptocurrencies by total market valuation. The next iteration of a super cycle, which seemed to never stop, was being built by protocols.

In the midst of the 2018 crypto market crash and throughout the bear market, Terraform Labs launched Terra. With up to 20% interest on its stablecoin using the Anchor protocol, the Terra ecosystem boasted the best yields in decentralized finance (DeFi) as its main draw and justification for glory.

In the ecosystem, Terra had 73 projects built as of March 2022. By the end of the year, the team hoped to have added at least 87 more projects. In its effort to overtake the market leader, Ethereum, Terra was beginning to compete seriously with BNB Chain, Solana, Cardano, Avalanche, and other layer-1 blockchain infrastructure.

The Interblockchain Communication Protocol allowed Terra, a blockchain built on the Cosmos network, to scale and work with other blockchains (IBC). Terra benefited from users’ hunger for fresh market chances as a result of the bull market’s buzz luring liquidity.

In May 2022, Terra had more than $21 billion in assets, accounting for over 90% of the total value locked (TVL) of all Cosmos blockchains.

That same month of May will be remembered as Terra’s collapse. The Terra token was meant to keep the algorithmic stablecoin pegged, but it didn’t. The thriving ecology Terra had created was left for dead, and in only a few days, billions of dollars were wiped out of the market.

Terra’s Response to the Crash

Those projects that had decided to build on Terra were now faced with a difficult choice that had never before occurred at this scale or intensity.

Through Terra 2.0, an effort was made to provide badly needed liquidity to those affected in order to compensate projects. Half of the tokens were made available on June 17 when the grants were given out, with the remaining tokens remaining locked for a three- to six-month linear vesting period.

The Terra 2.0 Emergency Builder Allocation scheme will make 35 more tokens available to the projects that remained. Neptune Finance will receive the most LUNA, worth nearly $185,000, on September 17. 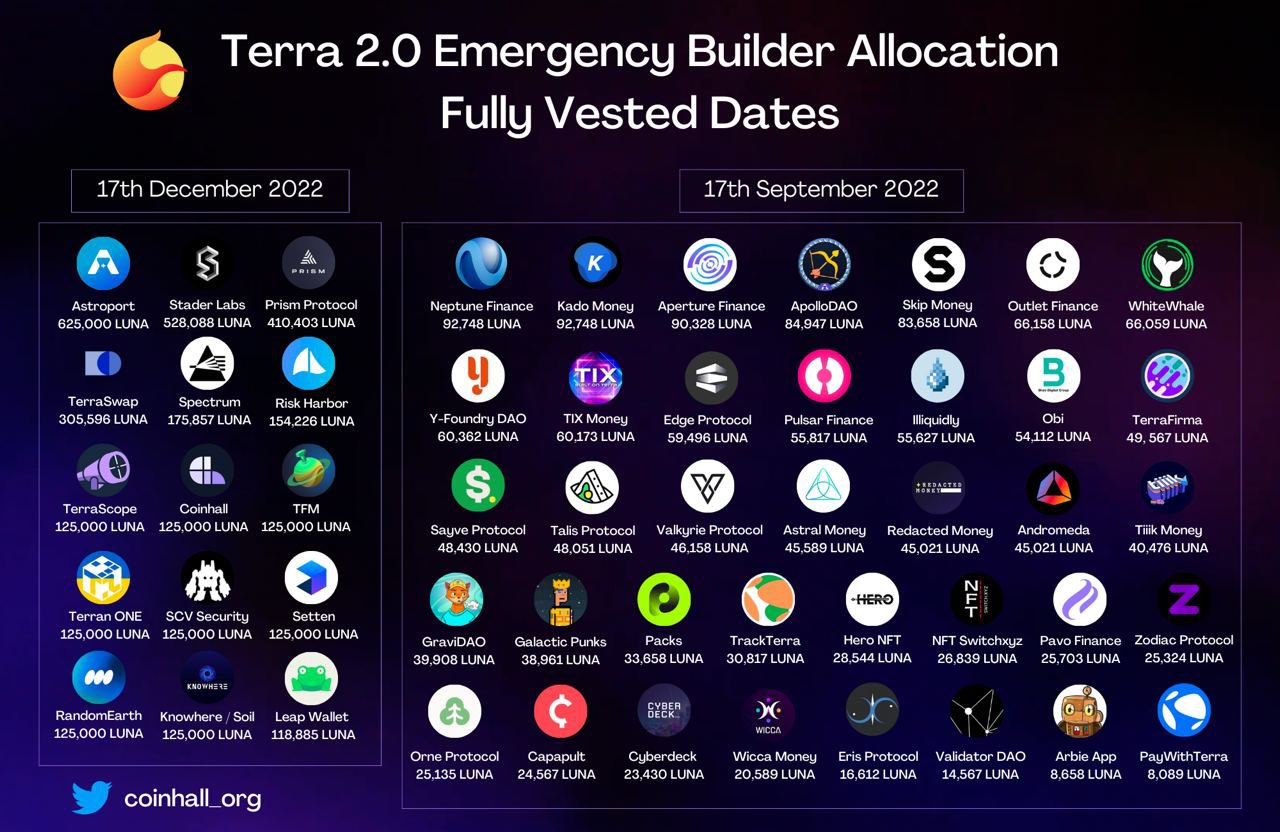 Does This Mean Competition For Terra?

Terra 2.0 was a logical migration choice for some of the protocols as Terra was constructed from within the Cosmos network. Projects were able to stay within this ecosystem and transition to a new blockchain with ease thanks to the IBC architecture.

Since other blockchains started using developer grants to recruit talent and new projects to their networks, not every project found the idea of staying within Cosmos to be appealing.

Ethereum Virtual Machine (EVM) compliant blockchains have been surpassing the competition as the Ethereum Merge approaches.

Through Polygon’s multimillion-dollar Terra Developer Fund, an Ethereum sidechain, more than 48 projects from the Terra ecosystem were able to join. a successful tactic for luring the talent that became suddenly available after Terra failed in May.

The BNB Chain Fund, which has $1 billion in investment and grants to distribute among those projects deploying within the BNB Chain ecosystem, is dedicated to providing investment and support to projects that are thought to be migrating from the Terra ecosystem. BNB Chain is Binance’s EVM-compatible blockchain.

Other networks, such as VeChain and Kadena, attempted in vain to benefit from the talent migration.

Creating a new chapter for projects that made it

Many wonderful ideas and smart people were pushing for advancement and had good intentions in what they were doing on Terra. These creative individuals will continue to innovate and create tools for the improvement of the space as a whole from the ashes of the catastrophe.

At the time of writing, six projects were working on the new Terra ecosystem, each with little more than $23 million TVL.

According to Chauncey St. John, founder of the Angel Protocol, “We lost a huge chunk of our treasury but live to fight another day and will be relaunching in the next couple of weeks.”

He also added that: “Angel Protocol has learned the importance of diversification and leaned into the fact that we can do more good as a multi-chain entity. As such, we’re launching both IBC and EVM compatible hubs.”

Lido, the top liquid staking derivatives protocol recognized for dominating the Ethereum liquid staking market, also provided its services to LUNA token holders who wanted to stake with them while remaining liquid.

Following the demise of Terra, the protocol chose to wind down its operations centered on LUNA and initiate a shutdown procedure for this liquid staking currency. For the time being, Lido has expressed no interest in supporting Terra 2.0 liquid staking tokens.