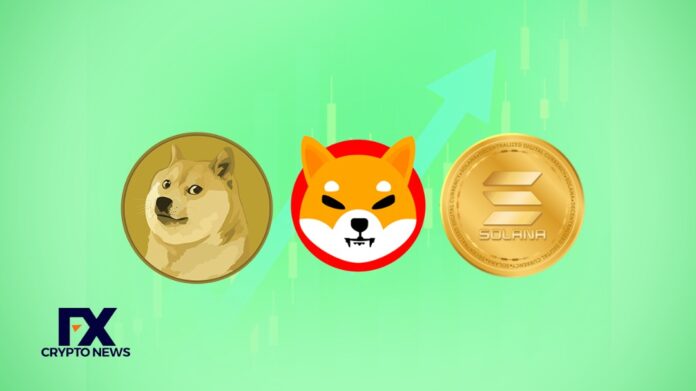 While Bitcoin underperformed in the market cap, other top cryptocurrencies were at their best during the early hours of Friday. Solana and Avalanche both gained 7%. On the other hand, Dogecoin and Binance’s BNB grew by 4%.

The global cryptocurrency market cap lessened to the $2.02 trillion mark, advancing more than 2% in the last 24 hours. However, the total cryptocurrency trading volume dropped sharply by 32% to $82.83 billion.

There has been a lot of hype in the cryptocurrency market, especially for Dogecoin, Shiba Inu and Solana.

Elon Musk recently announced that he would be taking a seat as a board of directors member on mega social media platform Twitter Inc. This update led to the Dogecoin token, DOGE, advancing from $0.143 to over $0.156 a few minutes after. Shiba Inu also spiked by 5% following the DOGE upward movement.

Furthermore, data from Coingecko reported that Dogecoin went up 4.5% in the last 24 hours after the surprise feature of the memecoin mascot. The cryptocurrency, which traded at a low of $0.141 yesterday, spiked to a high of above $0.151.

Shiba Inu also experienced mixed fortunes, especially after the launch of its metaverse. In addition, the cryptocurrency has seen a burn of over 410.30 trillion SHIB tokens since its launch in 2020. As a result, Shiba Inu has created a burn portal that will increase the burn rate in a year, impacting the currency’s value in the market cap.

Moreover, Shiba Inu’s development is not restricted to burn rates alone. Major payment processing platforms have included the token on its platform for merchants to use as a form of payment. As the burn manages the token’s supply cycle, utilising the token as a payment means will increase its value.

Solana’s native token, SOL, also took the lead among significant cryptocurrencies as the broader market remained level after a strong start from the beginning of this week. The token grew by 14% to $127 recently, which was a two-month high and close to the resistance of $130