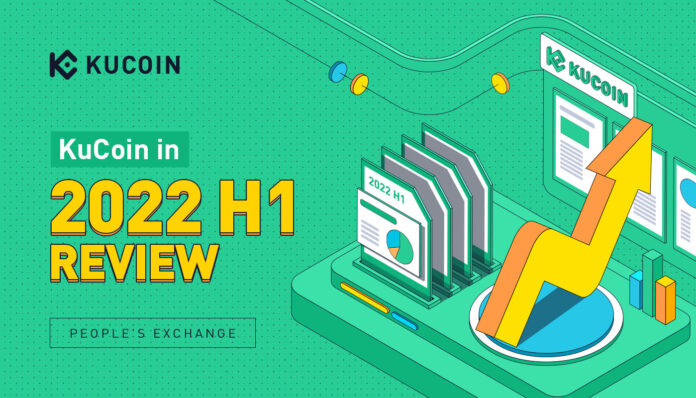 Major cryptocurrency exchange KuCoin has released its semiannual report highlighting the main metrics and achievements of 2022. The information includes the market performance and innovative product development to solidify the exchange’s position in the decentralised assets market.

The first half of the 2022 report by KuCoin shows that the number of registered users is currently over 18 million, while global employees exceeded 1,000. The development comes as KuCoin received a $150 million pre-Series B funding round from Jump Crypto, Circle Ventures, IDG Capital, and Matrix Partners, bringing its valuation to $10 billion.

Since the beginning of the year, KuCoin achieved a cumulative trading volume for Spot and Futures exceeding the $2 trillion milestones, showcasing a 180% growth compared with the same period in 2021.

Peak trading volumes for Spot were recorded at $11 billion, while Futures reached $23 billion. Compared with the same period last year, the European market led the first half of 2022 at $481 billion in trading volume, up 381%. Latin America achieved $453 billion at a 189% increase, while Africa & the Middle East saw $392 billion in volumes by 152%.

On the user growth side, the leading exchange attracted approximately 9.75 million newly registered users globally in 2022 H1 — up 219% compared with last year — mainly from Asia, Europe, Africa and the Middle East.

In terms of team traction, KuCoin is recruiting about 300 talents in R&D, marketing, business development, and other directions to continue development.

In H1 of 2022, the crypto platform listed a total of 137 crypto assets, bringing the number of assets available to over 700, including a total of 31 crypto assets with world premiere listing and five assets listings on the exclusive token launch platform Spotlight, and five projects launched on Burningdrop.

The exchange launched the NFT Marketplace – Windvane and a $100 million Creators Fund to empower Web-3.0 exploration on the innovative product frontier. Another major release was KuCoin Wallet, which officially went live as an easy-to-use crypto wallet that supports multi-chain aggregation powered by the KuCoin ecosystem.

The H1 2022 report showcases the exchange has achieved considerable traction in its global expansion and product deployment.

The Seychelles-based crypto exchange was established in September 2017 and has grown to be one of the top five exchanges across the globe, according to CoinMarketCap. Forbes also named the platform one of the Best Crypto Exchanges in 2021. Additionally, in 2022, The Ascent named the exchange the Best Crypto App for enthusiasts.

As a user-oriented platform focused on inclusiveness and community action reach, it offers over 700 digital assets. Currently, it provides spot trading, margin trading, P2P fiat trading, futures trading, staking, and lending to its 18 million users in 207 countries and regions.

In 2022, KuCoin raised over $150 million in investments through a pre-Series B round, bringing total investments to $170 million with Round A combined, at a total valuation of $10 billion.