In Just Two Hours, the Terra LUNA Classic (LUNC) Supply Has Been Reduced By Over 9 Million

After weeks of anticipation, the LUNC tax parameter change went live today at around 6:18 UTC. The tax parameter is set to run until the LUNC supply reaches 10 billion tokens.

According to data from LUNC validator StakeBin, over 9 million LUNC tokens have been burned in the short time since the LUNC 1.2% tax plan went live. Specifically, the current supply is approximately 6.9 trillion. 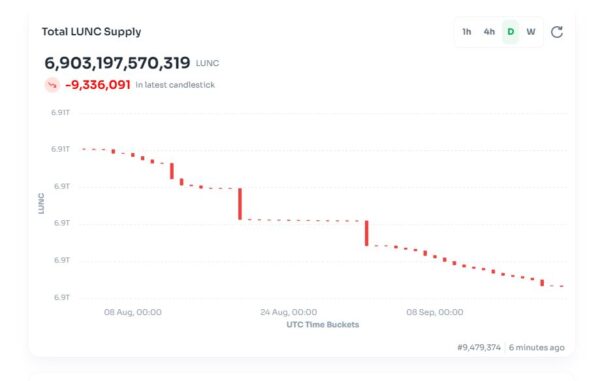 To get the most out of the tax burn, the Terra Classic network will need to maintain high volumes while maintaining a low LUNC price. Furthermore, even with these conditions in place, the network could take up to a decade to reach its goal with a burn rate of 1.2%.

LUNC Burn, an unofficial account tracking LUNC burn activity, attempted to give the community a sense of what can be expected following the parameter change in a Twitter thread on Tuesday, using only on-chain volume for the last two weeks.

Here’s How LUNC Would Be Burnt

The analysis emphasizes once again that the higher the volume, the greater the burn.

At these rates, it will take at least five years to increase Terra classic total supply to the billions. It is important to note that the community has other ideas for reducing the number of LUNC tokens in addition to the 1.2% tax burn.

The community has obtained support from various trading platforms and exchanges to collect and burn the 1.2% tax from off-chain transactions like spot trading activity in addition to on-chain transactions. MEXC Global launched the first burn event, burning more than 466 million LUNC over the course of two weeks prior to the proposal going live.

Many members of the community wish the exchange would resume burning LUNC tokens even though the event is done because the exchange had suggested it would continue based on community reaction. Along with Kucoin and MEXC Global, trading platform eToro confirmed its intention to implement the suggestion on trading activities yesterday.

However, solely for on-chain activity (deposits and withdrawals), a number of other exchanges such as Binance and Kraken have also offered their support.