Shiba Inu has surpassed Dogecoin as the most popular dog-themed cryptocurrency on Twitter, according to real-time Twitter follower count data. Shiba Inu now has 3,441,546 (3.44M) followers on Twitter, while Dogecoin has 3,439,826 followers (3.43M).

Shiba Inu (SHIB) has more Twitter followers than Dogecoin (DOGE), making it the most popular cryptocurrency with a dog theme. This occurred when SHIB performed admirably on August 14, 2022 (Sunday), going over 30% in a 24-hour period. 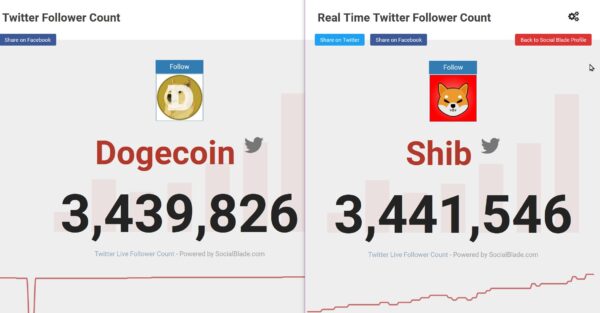 At the same time, Shiba Inu outperformed Avalanche (AVAX) and Polygon (MATIC) on Sunday, surpassing both to rank 12th among all cryptocurrencies in terms of Market Cap.