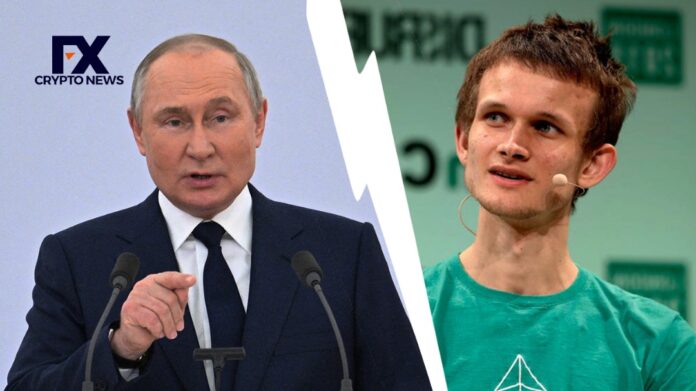 Vitalik Buterin, the co-founder of Ethereum (ETH), has again come out to lash out at Russia as its invasion of Ukraine continues.

Buterin has gradually developed a hatred for the Russian government over the country’s refusal to put the ongoing conflict with Ukraine to a halt.

In a recent interview, the Ethereum cofounder noted that he was a big admirer of the Russian government led by President Vladimir Putin. His love for president Putin prompted him to engage in a conversation with the Russian ruler five years ago.

However, he revealed that the affection he once had for President Putin and the Russian government is gone. “The country continues its invasion of Ukraine, killing people and destroying cities,” he continued.

“Vladimir Putin’s lovely Russian government is one of my enemies now. At the present time, there are cities that are being bombed. There are millions of lives and peoples’ families and futures that are being potentially destroyed and cut short, and a beautiful country risks being turned into Syria,” the Ethereum co-founder added.

While the war does not seem to be ending anytime soon, Buterin noted that the primary focus should be on rendering aid to people who are sorely devastated by the war.

Buterin Not Happy About Russia’s Invasion

Buterin has been outspoken about the situation in Ukraine as his origin is connected to both nations.

Weeks before the war, Buterin pleaded with president Putin and the government of Russia to look for other means to resolve the crisis and avoid going to war with Ukraine.

However, his plea was ignored as President Putin went ahead with a full-scale invasion of Ukraine. After the declaration, Buterin stated that the move was a crime against the people of Russia and Ukraine, who are mostly against the action of President Putin’s government.