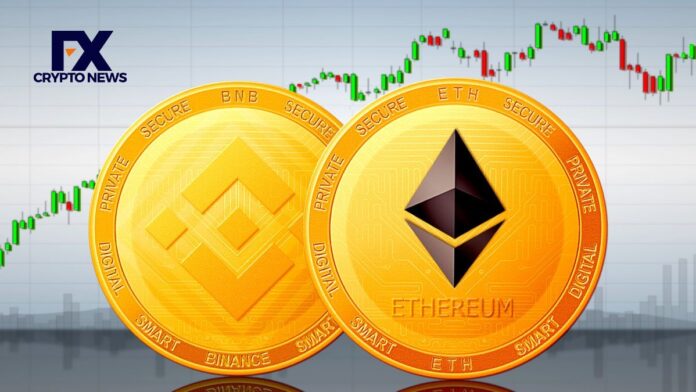 Ether (ETH) is in great shape. Ethereum’s native cryptocurrency has just hit a new all-time high, having already surpassed its ATH over the weekend. But not far behind, Binance Coin (BNB) is prowling and also breaking records.

This weekend, the price of ETH reached $2,145 for the first time in its history, while Bitcoin (BTC) is catching its breath and trying to pass sustainably above the threshold of $60,000.

Ethereum‘s native cryptocurrency has just experienced a second breakthrough, which took it to $2,152:This corresponds to an increase of +26% over the last two weeks and +139% over the year.

ETH is posting a capitalization this morning that exceeds 245 billion dollars. This sharp rise in Ethereum’s assets is proof of the second cryptocurrency’s power of attraction, despite rivals threatening it in the past.

Among Ethereum rivals, Binance Coin (BNB) and Binance Smart Chain are among the best positioned. Since the end of March, the increase in the price of the BNB has been explosive, with records broken due to the enthusiasm of investors.

Early this morning, the BNB reached a new all-time high, at more than 388 dollars. This was made possible by a further surge of +15% within 24 hours.

The capitalization of the BNB, to 58.4 billion, now exceeds that of other frankly altcoins of the same caliber (45 billion XRP, in 4th position, and 43.1 billion for USDT). The race is, therefore, well and truly launched between the two rivals