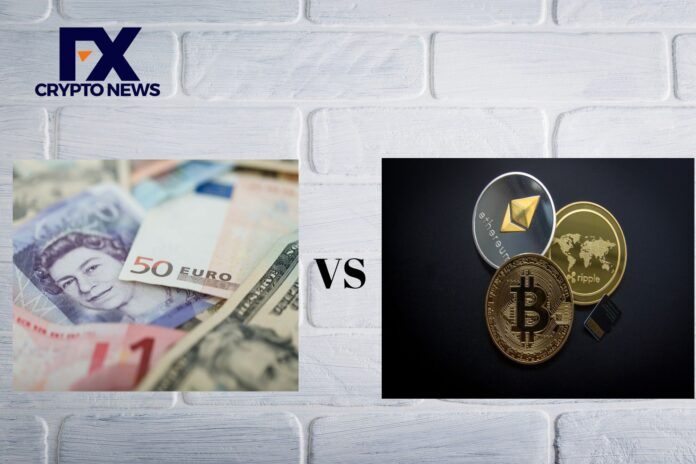 MONEY is a term we hear about in our daily lives. Before any object can be considered money, you must be able to use it as a medium of exchange. Before the emergence of Bitcoin in 2009, the most widely accepted and used medium of exchange is the fiat currency.

The invention of Bitcoin and blockchain technology brought about the world of cryptocurrency and one of the aims of cryptocurrency is to be globally accepted as a medium of exchange and if possible, replace the use of fiat currency.

Before we compare the two currencies, let’s have a quick look at the meaning of fiat currency and cryptocurrency.

What Is Fiat Currency?

Fiat currency or money is any currency that is accepted and in most cases issued by the government as a form of payment of paying taxes or debt. It is a legal tender that lacks intrinsic value and is usually issued by a central authority like a central bank. Examples of fiat currency include the Nigerian naira, US Dollar, Pounds sterling, Euros, etc.

Cryptocurrency is also known as digital money and uses cryptography technology to process, approve, and secure transactions. They are also decentralized in nature and unregulated by a central bank.

Now that we have an idea of fiat and cryptocurrency’s meaning let’s compare the two of them and see the similarities and differences between them.

Similarities Between Cryptocurrency And Fiat Currency

The similarities include the following:

Differences Between Cryptocurrency And Fiat Currency

Some other differences include the fact the cryptocurrencies have no physical form and are purely digital coins as they are traded and transacted entirely online. At the same time, fiat currency exists in both digital and physical forms. Fiat currencies are printed and regulated by the central bank, while cryptocurrency is created through a process known as mining that serves as a form of payment to the miners who perform different activities to regulate and preserve the system.