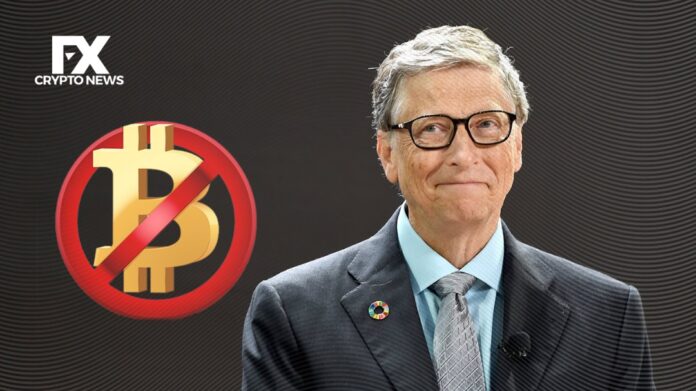 Bill Gates has been a prominent critic of various cryptocurrencies like Bitcoin and Ethereum. In his recent statement, the Microsoft chief mocked the digital asst saying that the “greater fool theory” underpins crypto investments such as nonfungible tokens (NFTs).

“I’m used to asset classes … like a farm where they have output, or like a company where they make products,” Gates said. “I’m not involved in that. I’m not long or short any of those things.” He said.

While speaking on Tuesday at a TechCrunch event in Berkeley, Calif, Gates said that people are buying cryptos and NFTs based on the belief that the asset will sell for a higher price because “somebody’s going to pay more for it than I do.”

Furthermore, during a climate conference, the philanthropist cited the Bored Ape Yacht Club NFTs, which generated millions of dollars in funding and celebrity endorsements, and questioned whether or not pricey digital photographs of monkeys would help better the world.

Gates expressed his view on cryptocurrency while representing Breakthrough Energy, a venture capital firm he founded; during the conference, adding that:

“Investors who believe in the “greater fool theory” buy expensive assets hoping that someone else would pay even more for them, and end up investing in these assets, regardless of their true underlying worth.”

Related: “You Are Telling Me To Buy More Bitcoin?”: El Salvador President Reacts

Bill Gates believes there is a future in digital banking compared to cryptocurrencies, as he has used his charitable organisations to promote digital banking services. In addition, Gates added that he avoids the crypto market because it is inconsistent, unlike traditional financial markets that are easily predictable.

The Microsoft boss believes only those with Elon Musk’s cash should invest in the cryptocurrency market.
“I don’t own any. I like investing in things that have valuable output. The value of companies is based on how they make great products. The value of crypto is just what some other person decides someone else will pay for it, not adding to society like other investments.”