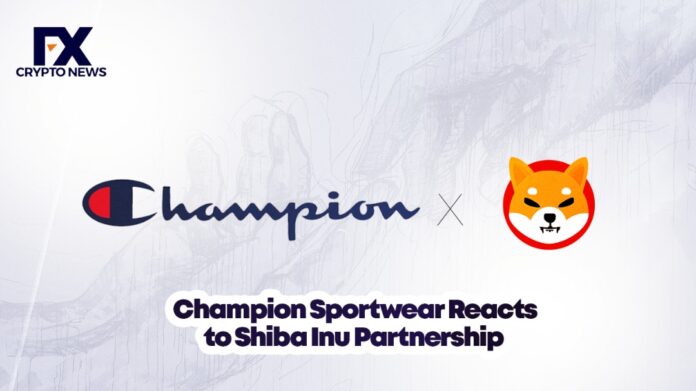 Champion, a USA-based sportswear brand, requested a Shiba Inu-themed collection of tee shirts and hoodies earlier this year. SHIB HEAD, a Twitter user, came up with the idea of Champion clothing and SHIB collaborating.

The Champion and SHIB partnership gained traction after the legendary phrase ‘Hey Robinhood when SHIB’ ended post-Robinhood listing. However, the concept faded as the Champion clothing line did not respond to requests for collaboration.

On Tuesday, however, things changed for the first time when snack brand Slim Jim asked their followers to tag brands and see if the brands would respond. A Shiba Inu investor who has previously spoken out about the Champion-SHIB collaboration known as “ChampionUSA.”

After nine months, Champion USA responded for the first time, “Does this count as a collaboration?”.

The user then expressed gratitude to Champion Sportswear for their response. “Good day, ChampionUSA!” How are things going? Thank you for your response! ”

Watcher Guru contacted Champion Sportswear and Hanes for comment on their plans to work collaboratively with Shiba Inu. Unfortunately, at press time, the sportswear company had yet to respond. Champion USA sportswear is owned by Hanes brands, which are worth $3.30 billion.

However, Champion’s tweet response could be interpreted as a joke, as the brand may have wanted to “play sport.” There has been no official word on whether Champion sportswear or the Hanes brand will collaborate with the Shiba Inu token.

In May, rumours circulated that Shiba Inu would join forces with the energy drink brand Red Bull. However, the collaboration didn’t go as expected, and no international brand has collaborated with SHIB.