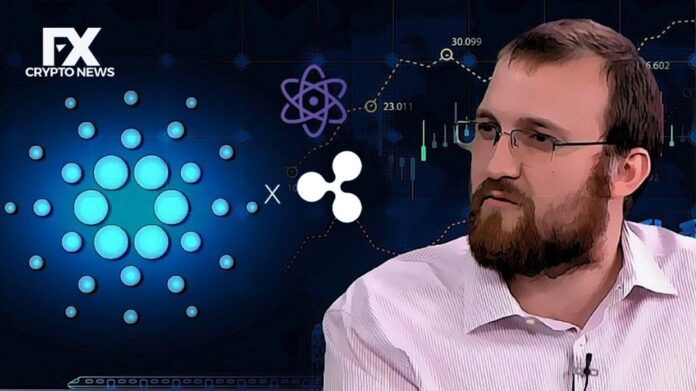 Charles Hoskinson, the founder of Cardano, responded to criticisms he received for recently commenting on the Ripple vs SEC lawsuit in a recent interview with popular cryptocurrency YouTuber BitBoy Crypto.

Hoskinson was surprised to see the XRP community criticize him because he called the allegations between some SEC staff and Ethereum a “grand conspiracy” in an interview with Thinking Crypto’s Tony Edward.

Among the many XRP holders who chastised Hoskinson for the remark, the Cardano CEO singled out Ripple CTO David Schwartz.

In response to Hoskinson’s “grand conspiracy” comment, Recall that Schwartz said: “There’s a lot of things I could say about what’s happened over the past few days with IOHK_Charles and the XRP community. But I will just say that this situation makes me very sad.”

Ripple CTO Under Fire From Hoskinson

In response to Schwartz’s remark, Hoskinson remarked that XRP holders shouldn’t be conspiratorial and that the Ripple CTO should be a man.

“I kind of was a little disappointed with David Schwartz and others saying a lot could be said, and it makes me sad. How about you grow a f*cking pair of balls and tell your community not to be conspiratorial? Maybe you should do that because, at the end of the day, we all have to live in this space together, and hedging in the face of this madness doesn’t solve anything,” Hoskinson said.

Hoskinson went on to say that XRP holders should look for ways to help Ripple win the lawsuit rather than accusing other cryptocurrency projects of corruption.

He also stated that even if Ripple wins, bad relationships with government agencies will continue to harm them.

“… Even if you do win, everybody hates you. Do you know why? Because you may win, but you still have all the bad blood because you just called a whole bunch of people in the Ethereum space criminals, who bribe government politicians, and you’ve weaponized the government agency. You made it personal. It’s like going to war with the IRS. Every year, they will find a way to audit your ass. Every year they’re going to grind you into the dust, and it never ends…”

Read article: Cardano Staking and How It Works

Many XRP holders, as expected, slammed Hoskinson for his recent remark.

@MK07272947 said: “He’s just mad no one talking about his project anymore. He must know the SEC is gonna come knocking soon.”

@BeergeekXRP said: “He’s a complete ass to blame David for any conspiracy bullshit.”
In response to Hoskinson’s recent remark, Digital Perspective stated that ETH Gate, a term used to describe William Hinman’s contentious Ethereum free pass speech, will not go away anytime soon because there is no disputing fact. He mentioned that he would feel the same way if the same things happened to ADA.