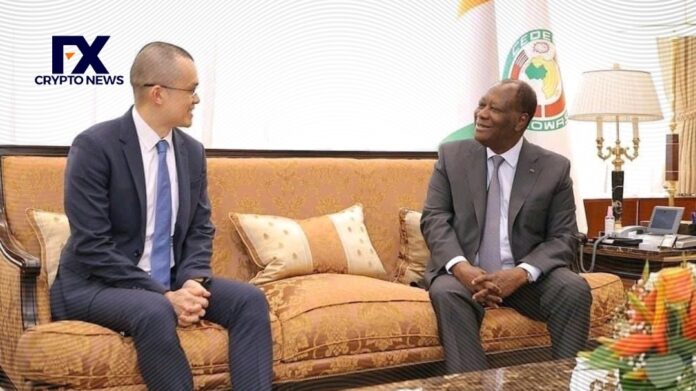 Binance CEO Changpeng CZ Zhao and President Alassane Dramane Ouattara had a brief meeting on Tuesday. During the meeting, the crypto exchange boss proposed to include cryptocurrency activities on commercial exchanges in the country.

The president of the West African country engaged in an interview with the Binance founder at the Presidential Palace of the Republic. The focus was on the economic and financial issues related to digital finance.

CZ urged the support of President Ouattara and the government’s support for integrating crypto activities in commercial exchanges in Côte d’Ivoire. Notably, being the world’s leading exporter of cocoa and raw cashew nuts and a net oil exporter, Côte d’Ivoire is the largest economy in the West African Economic and Monetary Union.

According to a tweet on his official handle, CZ stated that Africa could adopt cryptocurrency despite its existing infrastructure. With blockchain technology, many Africans can easily access digital finance with smartphones.

The continent has a large youthful population, and it is no surprise that there has been increased access to the internet and smartphone use compared to previous years. As a result, crypto adoption in Africa surged by over 1,200% in September 2021.

In addition, the Central African Republic became the first country to not only adopt Bitcoin as a legal tender but also to launch a crypto hub with its native token, Sango. The government is also prime to unveil its first metaverse platform as well.

While Binance bowed to regulatory pressure from the South African region last year and halted its futures trading service, it seems like the exchange aims to expand in the West African crypto market.