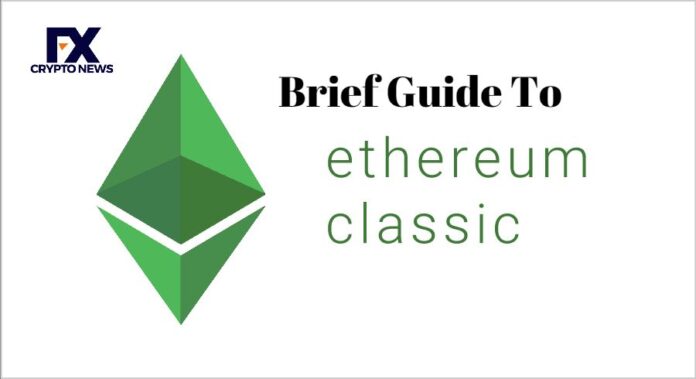 Ethereum Classic is a decentralized, open-source, blockchain-based distributed computing network that enables the running of smart contracts. It consists of a blockchain ledger, a native cryptocurrency called Ether (ETC), and a large ecosystem of applications and services. It allows the applications to run the way they are programmed without downtime or a third party.

Ethereum classic follows the principle of ‘code is law’ that states that smart contracts are self executing autonomous digital applications that have the ability to run on their own as they are programmed.

On the 30th of July 2015, Vitalik Buterin launched Ethereum via frontier. In 2016 the DAO (Decentralized Autonomous Organization) which was a complex smart contract to help in the funding of DAPPS created in Ethereum was formed. Due to the hacking of the DAO by a third party on the 17th of June 2016 where $50 million worth of Ether was stolen, the Ethereum was divided into two in order to be able to recover the funds that were stolen to their owners.

The network was split into Ethereum classic (which is the unaltered and older version) and the other new version was the Ethereum. This spilt voided the transactions of the hackers. The Ethereum classic cryptocurrency is traded in exchanges with the ticker symbol ETC and that of the Ethereum is ETH.

The validity of ether is done by a blockchain same as other cryptocurrencies. The blockchain doesn’t support the modification of data. The Ethereum classic runs using accounts and balances in a process called state transitions. The state shows the present balances of all the transactions and it is not stored on the blockchain but rather in a Merkle Patricia tree.

Ether is the cryptocurrency used for carrying out transactions in the Ethereum classic and it is also used to pay for Gas (a unit of computation used in transaction and other state transitions) and before you can send ether to an account you will need the Keccak-256 hash of the public key of the account.

In order to regulate the amount of ETC in circulation, the block reward for mining is reduced by 20% for every 5,000,000 blocks added to the blockchain. This is known as the emission schedule or 5M20. It is also called the fifthening.

How To Buy Ethereum Classic (ETC)